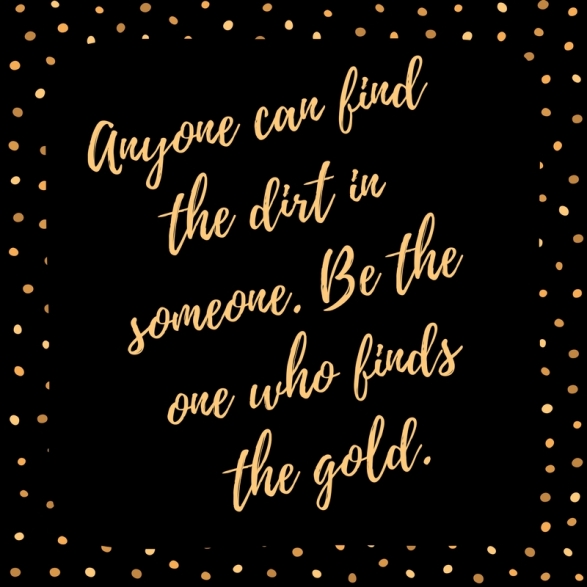 As I was praying with a friend yesterday, God showed me a picture of an old fashioned gold mine with men digging away at the rock face with pick axes. Behind them there was a rusty old rail track with wagons on it that they were throwing their ‘treasures’ into as they uncovered them and then worked them out of the rock face where they were held tightly. It was a slow, laborious process and the finds were slim pickings.

He then showed me the same men with sticks of dynamite which they used to get the job done quicker and more efficiently. As they used the dynamite the dirty, black rock face blew away to reveal a seam of gold running through it, just below the dirt, there all along, that had been taking the men ages to chip away at.

Suddenly there was more gold than they had seen before and it was falling away from the wall easily and they were loading it into the wagons. There was a cry of “we’ve struck gold” and celebrations at the momentous find. How easy it had been with the dynamite!

He then gave me another, similar picture, and this time it was an old fashioned scene set in a field with men digging around and looking for oil. Suddenly, there was a mighty sound of rushing and jets of thick, black oil shooting really high into the sky and showering all the men below, they were so covered that all you could see were their eyes. They were standing, arms outstretched and whooping with delight shouting “We’ve struck oil” and then dancing around in the rain of oil that was soaking them through.

Later in the evening I was on Facebook and a picture popped up with the phrase,

So, I looked up the scripture to read the actual verse and it said,

Prov 11:27 Whoever seeks good finds favor, but evil comes to one who searches for it.

Now I don’t believe in coincidences and I had been meditating on the pictures God had given me earlier in the day as I was bible journaling and I was so excited that God was talking to me about finding the gold in people. I then used the verse to journal in my bible as I reminder. 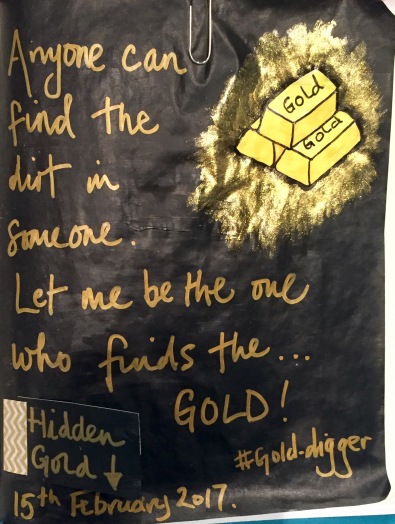 If you are a regular reader of this blog you will know I am writing a series currently on the gifts of the spirit and my most recent post was on the Gift of Prophecy. Now for me the gift of the prophetic is all about calling the gold out in people and seeing them through God’s eyes. In giving them a word from Papa you are revealing the father’s love to them as he uses you to communicate his message to them. It makes them feel known and loved by the creator of heaven and earth and that he is interested in their lives and knew all about them before he created the world.

I love the gift of prophecy and have sought to pursue it eagerly in my own life. I have written about this topic a lot as I love it so much and am keen to help and encourage others to realise that they too hear from Father God and that he loves to talk to his children for the edification and encouragement not just of the church, but for individuals and those who don’t even know him YET.

1Cor 14:1 Follow the way of love and eagerly desire gifts of the Spirit, especially prophecy.

Now, where was I?

Back to the pictures and I felt that there were people who long to see the gold in others but may feel they have been too quick to see the dirt. This may be an opportunity to ask God to help you see people through his eyes and to be overwhelmed with love for them where once you may have judged them. It may also be a time to ask for forgiveness if you have made judgements about people and remember that God is quick to come and forgive when we are truly sorry.

There may be others of you who feel tired and weary today and you feel like you have been chipping away at the stuff in your life where you long for a breakthrough. I think it’s also particularly about ‘old’ stuff that has been holding you back or has been hanging around for a long time and you feel like you’re not getting anywhere.

Is this how you are feeling today?

My prayer for you is that you will know breakthrough in the area that you are struggling in today. That you will be refreshed and gain new direction and freedom from drudgery and tiredness. Also that you would feel excited again for all that God has got for you and would celebrate your breakthrough wholeheartedly.

Isa 43:19 Behold, I am doing a new thing; now it springs forth, do you not perceive it? I will make a way in the wilderness and rivers in the desert.

I’m keen to reclaim the phrase gold-digger and am not ashamed to say I am someone who wants to continually see the gold in people and not the dirt. If that makes me a gold-digger then I don’t care!

Join with me and be a gold-digger today, it’s fun! 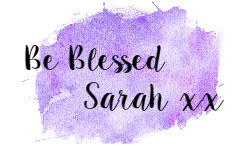 4 thoughts on “Finding the Gold!”